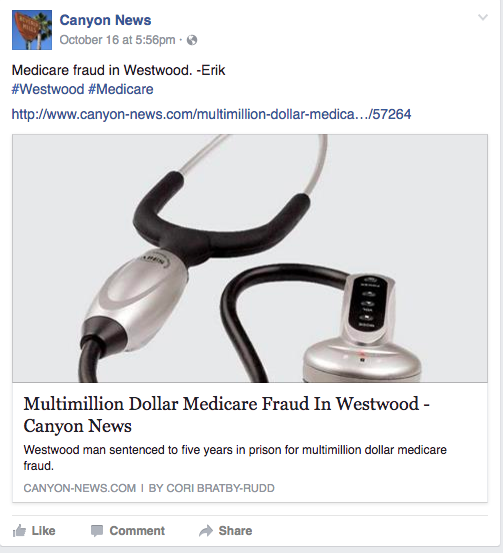 WESTWOOD —According to the United States Department of Justice, Valery Bogomolny, 44, of Westwood, was sentenced on Friday, October 7 to 5 years in federal prison for his role in fraudulently billing more than $4 million to Medicare. Bogomolny was convicted of fraud in a jury trial on November 6, 2015.

Evidence presented at trial between 2006-2009 stated that Royal Medical Supply, Bogomolny’s company, billed Medicare $4 million for various medical instruments that were either unnecessary and/or never provided to patients. The evidence also showed that the defendant created false documentation for such items to explain the cost of the billing claims. United States Attorney Eileen M. Decker stated that most of the doctors associated with the prescriptions were victims of fraud and that most of the patients never received any of the equipment financed by Medicare.

The Medicare Fraud Strike Force to date has charged 2,900 defendants who have together billed the program over $10 billion. Bogomolny was found guilty of 6 counts of federal health care fraud charged and was ordered to pay $1,266,860 in restitution in addition to his 5-year sentence.

The majority of the recent 10 convictions from the Medicare Fraud Strike Force involve companies that committed multi-million dollar Medicare fraud. Their website reports that the Strike Force, “teams have shut down health care fraud schemes around the country, arrested more than a thousand criminals and recovered millions of taxpayer dollars.”