Earlier this month, Akila Radhakrishnan was named the President at the non-profit Global Justice Center (GJC). Formerly serving as the Vice-President and the legal director, Radhakrishnan joined the GJC in 2010 and has been an integral part of the organization’s advocacy efforts. 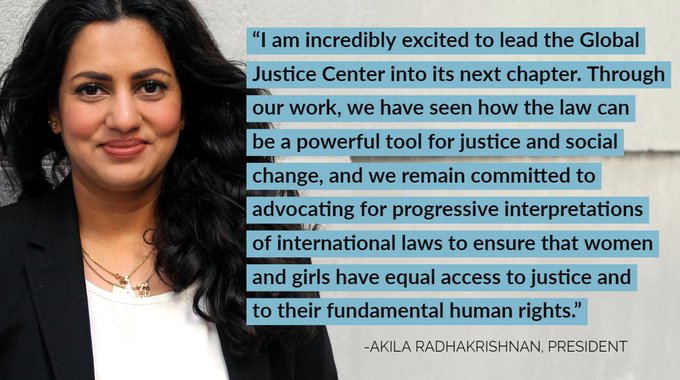 We are thrilled to announce that Akila Radhakrishnan (@akilaGJC) has been named the new President of the Global Justice Center. Read our full statement: http://bit.ly/2t3kYCP

The Global Justice Center’s mission is to provide “human rights through the rule of law.” With a staff of lawyers and advocates that specialize in international law, the non-profit works for equality by attempting to enforce international human rights laws. “International law is a powerful but underutilized tool for change, and we remain committed to ensuring equal access to justice for women under the law in the U.S. and abroad,” the organization noted in a statement. “In today’s increasingly authoritarian world, human rights standards provide an important yardstick against the constant roll-back in rights protections.”

Janet Benshoof, founder of the GJC, stepped down from her position in October 2017 due to health issues and passed away in December of that same year. “Ms. Radhakrishnan served as acting President during a difficult time of grieving and transition for the organization over the past six months,” Tracy Higgins, Chair of GJC’s Board of Directors, said in a statement. “Her leadership during that time, together with her legal expertise and commitment to the organization, made it abundantly clear that she is the best person to lead GJC into the future.”

Radhakrishnan, like Benshoof, brings a powerful feminist lens to her work. “We are confident not only in Akila’s ability to ensure the sustainability and viability of GJC for years to come,” said Higgins, “but also in her ability to meaningfully advance Janet’s relentless and uncompromising quest for equality and justice.” Radhakrishnan led the Gender and Genocide Project at the center, authoring numerous key reports and briefs, and offered expert legal advice and testimony to organizations such as the International Criminal Court, the United Nations, and the European Union. She also led the center’s efforts to ensure access to abortion services to girls and women raped in war—and in 2014, she co-authored a Ms. article on the subject.

“I am incredibly excited to lead the Global Justice Center into its next chapter,” Radhakrishnan said in a statement. “Through our work, we have seen how the law can be a powerful tool for justice and social change, and we remain committed to advocating for progressive interpretations of international laws to ensure that women and girls have equal access to justice and to their fundamental human rights.”

“As a woman of color and a first-generation immigrant, Akila’s appointment as President is a new and exciting opportunity for our organization,” Liz Olson, the Communications Manager at the Global Justice Center, told Ms. “Akila’s presidency represents a broader generational shift in the field of feminism and advocacy—and she plans to address issues of racism, classism, diversity and equality in GJC’s work.”